I thought I’d start off my blogging by throwing up a Demo of TP5 for SCSM 2016… Looks interesting from a performance standpoint on what has been improved here:

Additonal features to SCSM? Perhaps not immediately as they’ve brought the product into the 21st century and from the specs the product team have tested it with should avoid the sometimes laggy database / console transactions when a large number of connections / end users or workflows are being processed.

This first post is a simple deployment gallery show and tell of the install of the Management Server install and proof that it’s the same underlying product but with major performance improvements.  Subsequently, I will install the Data Warehouse, sync them up and then populate it with some data in order to replicate some reports.

In later posts I will then go onto some of the finer details and deep dive into the inner workings of the product.

So, register and download the eval from the TechNet portal: 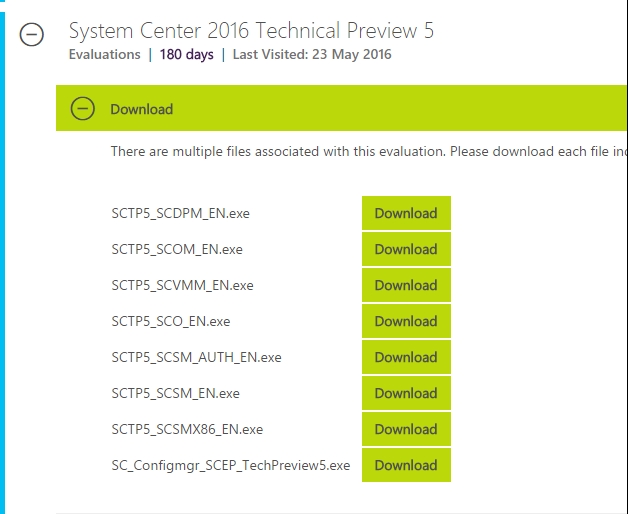 Once registered, you should be presented with the following components of TP5 for eval:

Download the SCTP5_SCSM_EN.exe binary and you’re good to go.

The other two downloads are the Authoring Tool and an x86 version.  I’m not going to evaluate the x86 version at this point but can only assume the functionality is comparable with the x64 version and provided for legacy systems – but who is using 32bit these days 🙂

Anyhow – onto the main event, firing off the exe extracts the install to a media folder, put that somewhere sensible and then run as if you were installing from the ISO image.

For the environment I’ve literally spun up two VMs for the Management Servers within my LAB domain and pointed them at a prexisting SQL instance, created two service accounts and a group – added that as local admins on the boxes & added the service accounts to that – simples 🙂

Following are the screen shots from the install, hopefully they should be self explanitory: 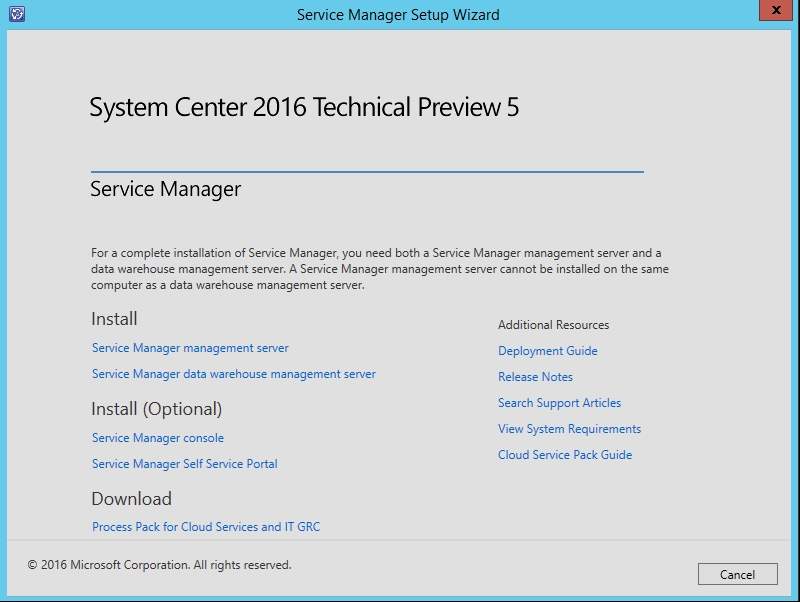 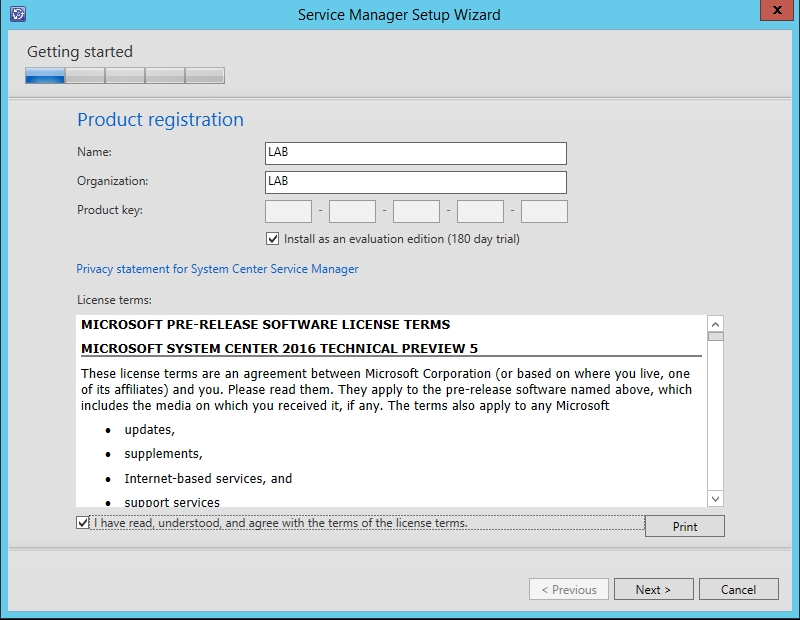 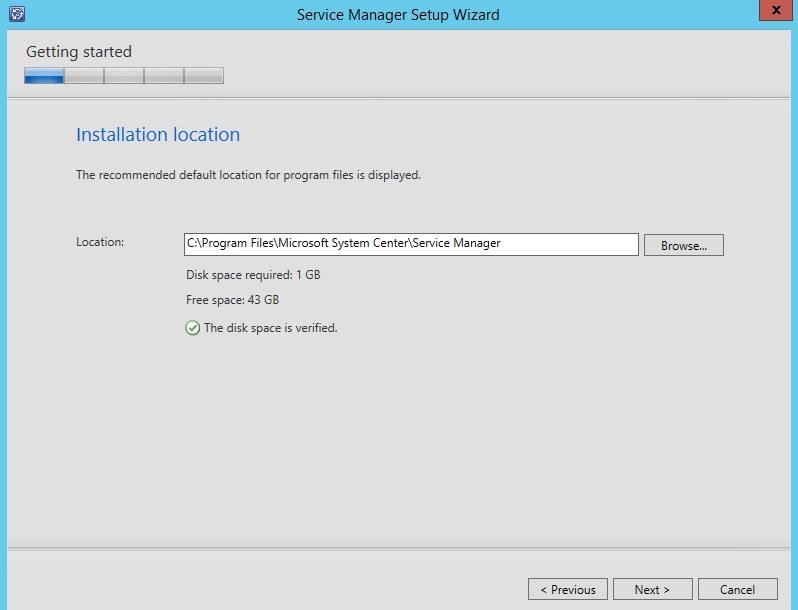 Right – this one was intentional – and got the expected failures as I wanted to see if the underlying prereqs had changed.  The most noticable was the AMO objects now at the 2014 Feature Pack whilst the others remaining the same as for 2012 R2. 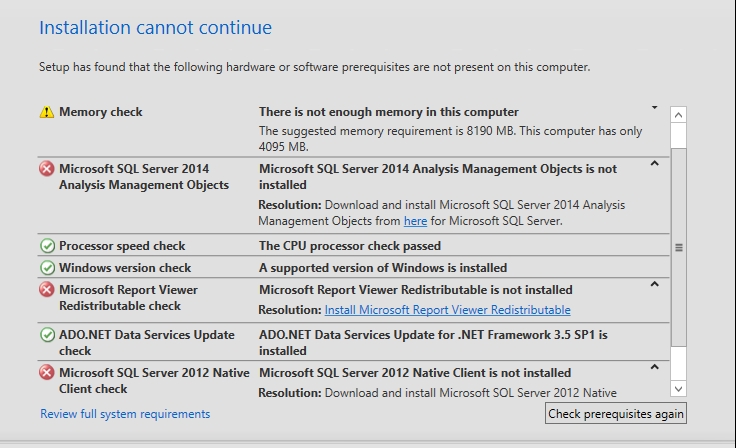 Takes care of the first one – still located on the install media for the Microsoft Redist, Report Viewer: 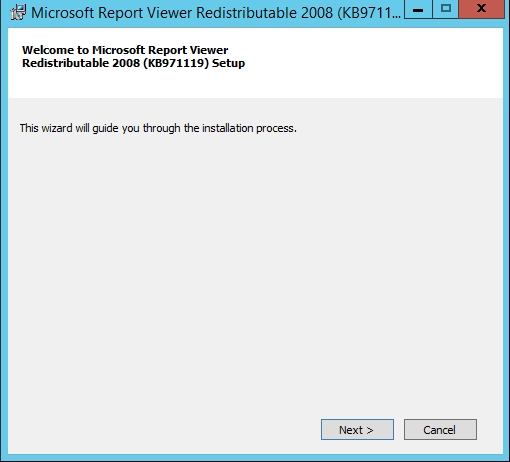 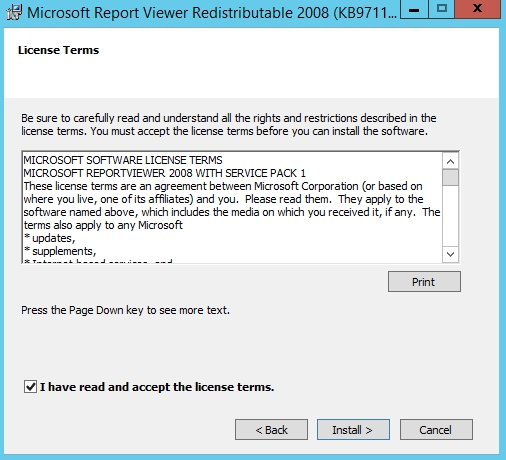 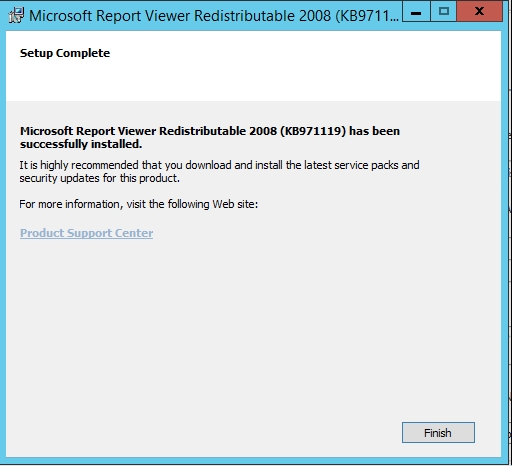 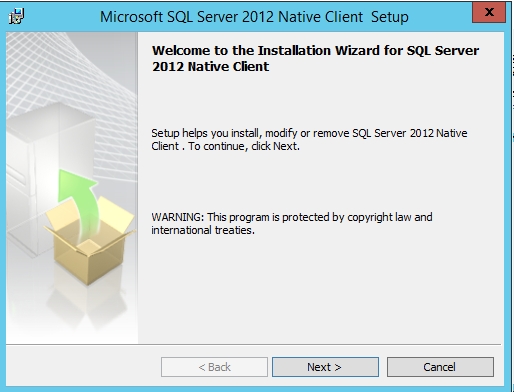 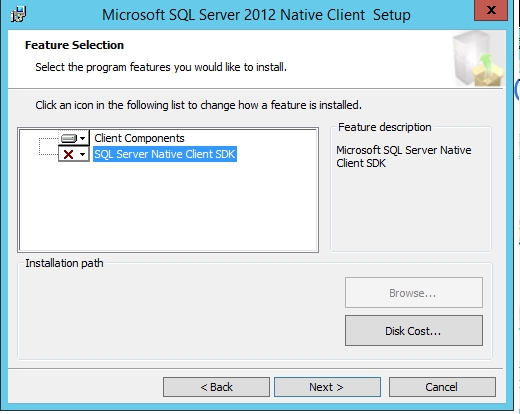 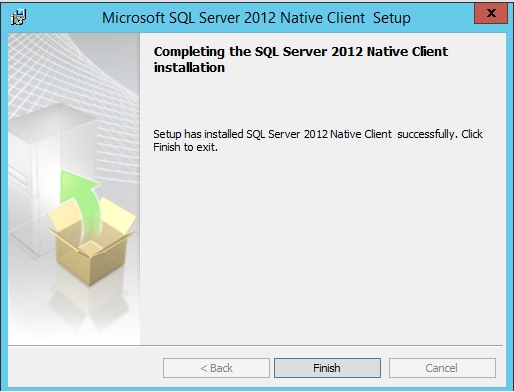 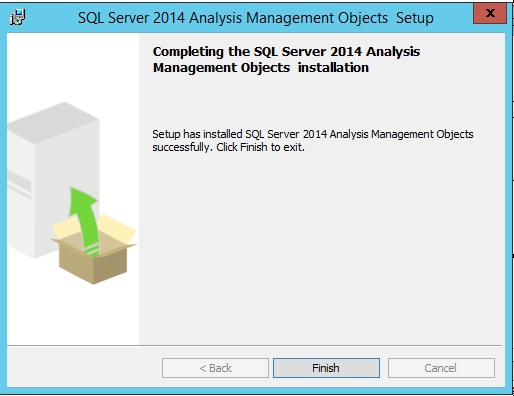 Now All prereqs green and ready to go.

One thing I will do later is try out pointing this to an 2014 AlwaysOn listener as currently it’s supported but not from the native installer: 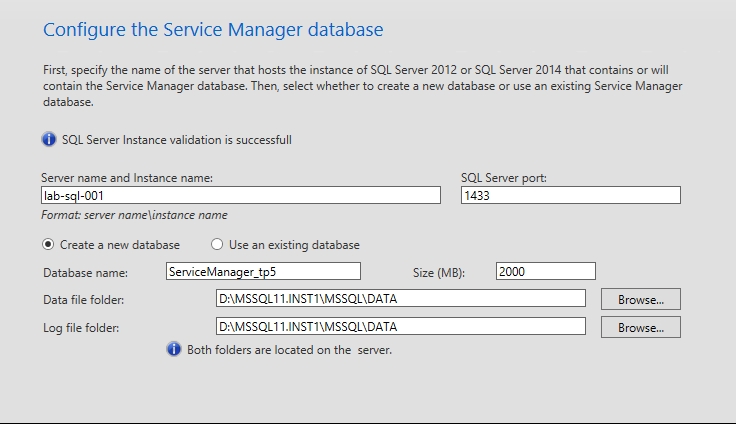 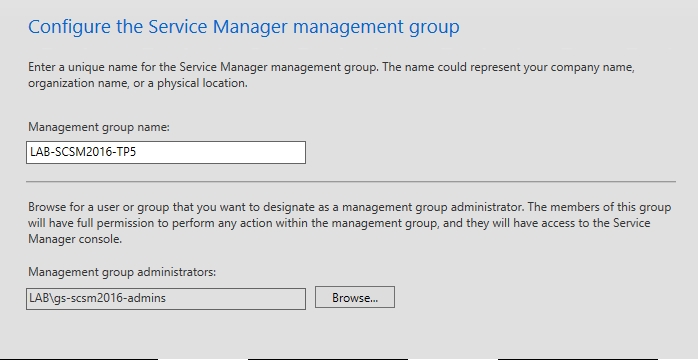 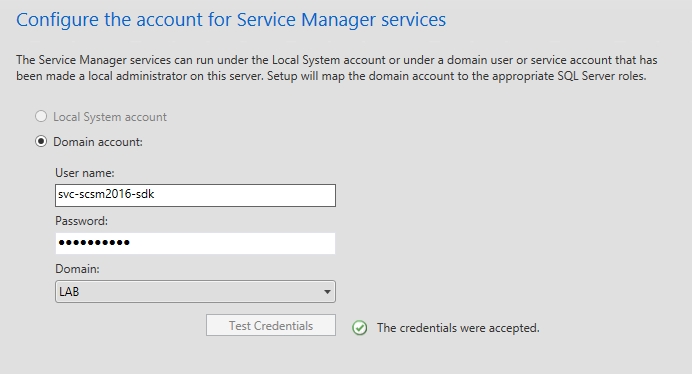 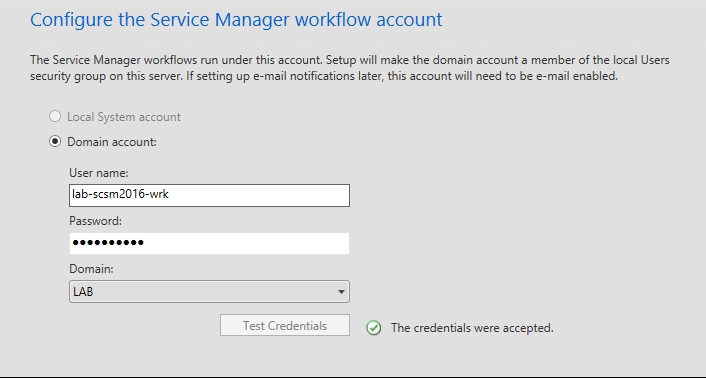 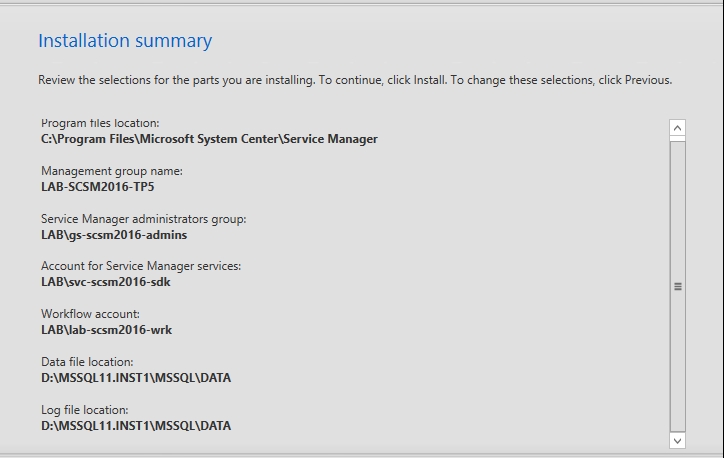 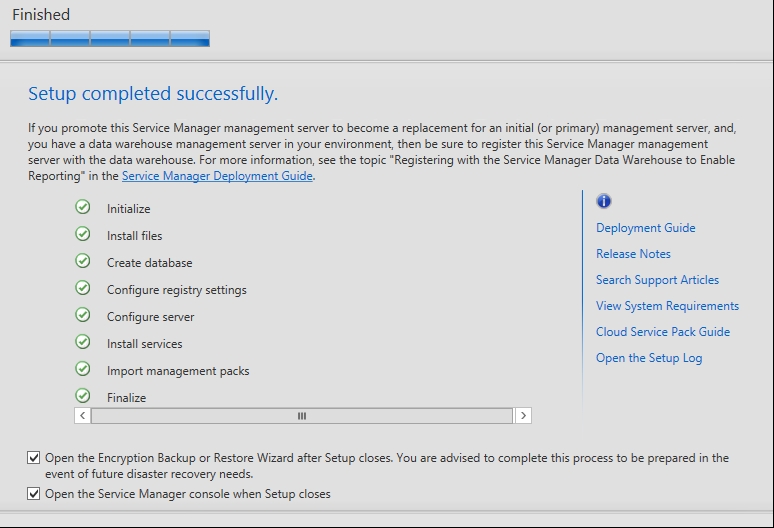 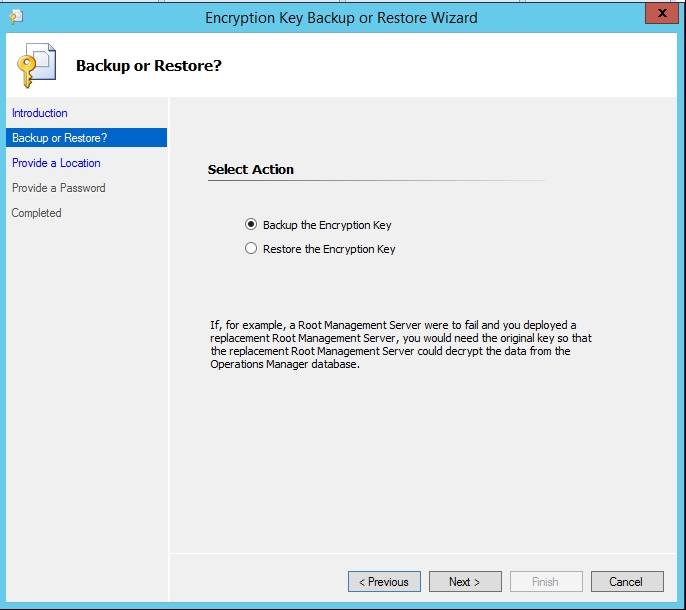 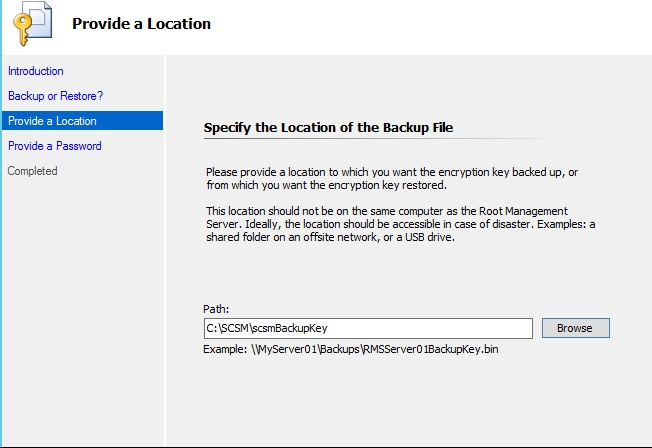 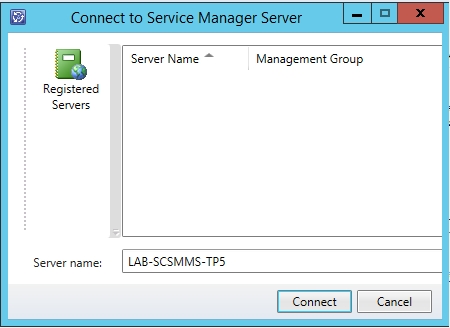 Splash Screen has been updated 🙂 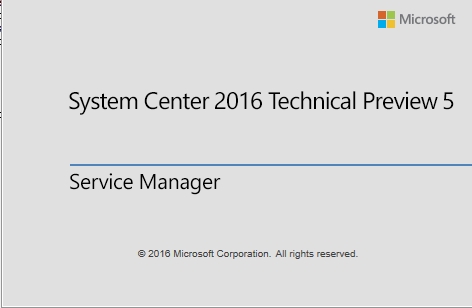 And Connecting it through to the Console

So, we’re there 🙂  Nice and easy and not much changed on face value but I’m sure we’ll see what turns up when we start some reporting and running workflows against it.

In the next post I will install, configure and synchronise the Data Warehouse so we can start looking at the Reporting Features and date slicers that have been introduced.  I’ll also throw up the Authoring tool in the next one and have a look at how or what has been improved there as currently I couldn’t find any solid documentation on it.